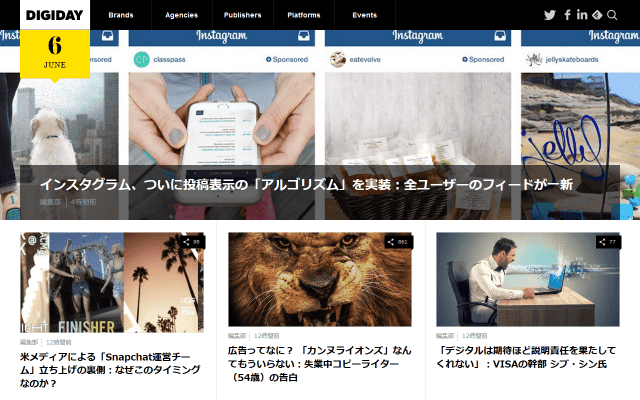 Please give us a summary of DIGIDAY Japan’s site.

DIGIDAY Japan is a Japanese-localized site run by Infobahn Inc. that uses a license from the New York-based DIGIDAY. At Infobahn Group, we run the site to dispatch the latest information regarding digital marketing strategies in order to invigorate all industries. Thanks to you, we now have many users and have grown to 14 million page views a month (as of December 2015).

What were some of the issues you encountered?

We had a very tight schedule until launch, and needed to build the site and server in a very short amount of time.
The WordPress template was imported from the American version of DIGIDAY, and our plan was to localize it as-is. We needed developers who could understand a pre-made template, and who had a lot of skill in the creation and operation of WordPress sites, so that it could be completed quickly. In addition to that, we held a promotion following launch, which meant we needed an infrastructure that could handle heavy traffic without issues.

We heard you had a tight schedule for making your site.

Since we were on such a tight schedule, we wanted the most accomplished in the field, so we asked Prime Strategy. We began talks in June, development started in August, and the site was to be released on September 1st. However, in the beginning of development, we had other projects to focus on, so it became a group effort only from the middle of August.

Please tell us the results of using KUSANAGI.

Once we began using KUSANAGI for AWS, our performance problems vanished and we reached 14 million page views, but once we made the switch to PHP 7, which KUSANAGI was already utilizing, we received an even greater performance boost. And with Amazon Aurora, we have greater reliability, and can focus more on posting media.

What is your impression of KUSANAGI?

It feels extremely fast and full of new technology. I was glad to see it supported PHP 7 so soon after release. DIGIDAY’s [Japanese] front-end is based on nginx and php-fpm, using Amazon Aurora as database. At the same time, it’s also adopting WordPress’s Drops-ins, Hyper-DB. With Read-Replica load balancing to establish stabilization of performance and availability.
DIGIDAY’s site is build up by 2 instances, with Elastic Load Balancing to balance load,isolate Availability Zone on purpose to improve availability.

KUSANAGI for AWS
About KUSANAGI

Not merely tuning hardware and middleware, Management Host Services we provide include from revise the theme and plugin source code, optimizing SQL and database till continuous performance improving services and maintenance to dedicate your WordPress.
https://kusanagi-hosting.com/